In the latest update on Microsoft’s massive layoffs, we now have a better idea of ​​the extent of the layoffs for the Microsoft Mixed Reality team. The entire team behind AltSpaceVR as well as the Mixed Reality Tool Kit team appear to have been removed entirely. AltSpaceVR was once one of the leading social virtual reality platforms, with the company being acquired by Microsoft in 2017, but it is now set to shut down in March and seems to be burying Microsoft’s metaverse ambitions. However, the Microsoft Mesh team will apparently take its place, but it remains to be seen how committed the company is to the metaverse concept.

Either way, these layoffs cast serious doubt on the future of HoloLens, which is currently struggling to keep its military contract with the US government.

The scale of Microsoft’s layoffs continues to be revealed through social media posts as we understand how hard Microsoft is trying to restructure itself.

Last week, Microsoft revealed it was joining Amazon, Google and others in laying off thousands of employees. The cuts reduce Microsoft’s global workforce by 5%, which has grown rapidly to take advantage of opportunities that have arisen during the pandemic. With the end of the work-from-home culture, rising inflation and Putin’s war of aggression in Ukraine disrupting energy markets, big tech companies are cutting costs to keep shareholders happy in a tough economic environment.

Satya Nadella confirmed the layoffs in a statement:

Sent by Satya Nadella
We live in a period of significant change, and when I meet with clients and partners, a few things are clear. First, while we’ve seen customers accelerate their digital spend during the pandemic, we’re now seeing them optimize their digital spend to do more with less. We also see companies across all industries and geographies treading carefully, as some parts of the world are in recession and others are anticipating one. At the same time, the next great wave of computing is being born through advances in AI as we transform the world’s most advanced models into a new computing platform.

It is in this context that we, as a company, must strive to consistently deliver results, investing in our long-term opportunity. I am confident that Microsoft will emerge stronger and more competitive, but that requires us to take action based on three priorities.

First, we will align our cost structure with our revenue and customer demand. Today, we are making changes that will reduce our total headcount by 10,000 jobs by the end of the third quarter of FY23. today. It is important to note that while we eliminate roles in certain areas, we will continue to hire in key strategic areas. We know this is a difficult time for all concerned. The management team and I are committed to conducting this process in the most thoughtful and transparent manner possible.

Second, we will continue to invest in areas that are strategic to our future, meaning that we allocate our capital and talent to areas of sustainable growth and long-term competitiveness for the business, while deploying to areas of others. These are the kind of hard choices we’ve made over our 47-year history to remain a stable company in an industry that doesn’t forgive those who don’t adapt to platform changes. That’s why we decided to take a $1.2 billion charge in the second quarter related to severance pay, changes to our equipment portfolio and the cost of lease consolidation as we create greater density in our office space. work.

And third, we will treat our staff with dignity and respect and act transparently. These decisions are difficult, but necessary. They are especially difficult because they affect the lives of people and people – our colleagues and friends. We are committed to ensuring that everyone whose role has been removed has our full support during these transitions. US employee benefits will receive a variety of benefits, including severance, six months of continuous medical coverage, six months of stock vesting, career and 60-day notice of termination, whether required or not such notice legally. Benefits for employees outside the United States will be subject to the labor laws of each country.

When I think about this very moment, the beginning of 2023, it’s show time – for our industry and for Microsoft. As a company, our success must match the world’s success. This means that each of us and every team in the company must set the bar higher and outperform the competition to deliver meaningful innovations that customers, communities and countries can truly benefit from. If we can do this, we will emerge stronger and prosper long into the future; It’s that simple.

I want to express my sincerest thanks and gratitude to everyone who has contributed to Microsoft to date, and to everyone who will continue to do so as we move forward. Thank you for the focus, dedication, and consistency you show every day for Microsoft, our customers, and our partners.

As a result, Microsoft is rearranging its bets on the company’s future. Although it acquired AltSpaceVR in 2017, Microsoft killed off the entire team behind the virtual reality workspace project last week. As a result, AltSpaceVR will shut down for good in March, ending Microsoft’s metaverse efforts. Microsoft Mesh is being touted as the successor to AltSpaceVR, but it remains to be seen how serious the company is about the so-called metaverse, despite CEO Satya Nadella’s verbose speeches on the subject at recent events. 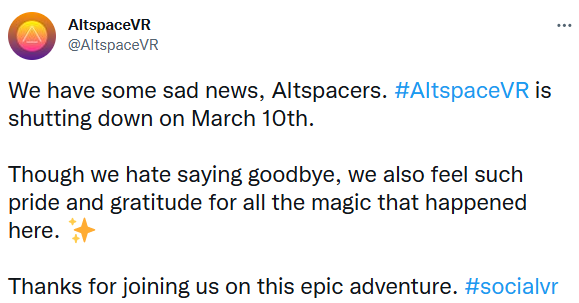 Along with the death of AltSpaceVR, Microsoft also killed the entire team behind the popular MRTK framework. MRTK is Microsoft’s Mixed Reality Tool Kit, which is a cross-platform framework for spatial anchors in virtual reality spaces. MRTK is designed for Unity VR integrations and works with the HoloLens-focused Meta headset.

The removal of the MRTK and AltSpace VR teams means that Microsoft has little desire to continue working on the HoloLens headset. Microsoft’s layoff of 10,000 employees could put the company’s HoloLens and headset-based projects on hold, as all teams working on its mixed reality and virtual reality products have been gutted by HR.

The elimination of the key teams behind the AR and VR efforts could indicate that Microsoft is not interested in leading the way with the metaverse concept, leaving the field open for Meta’s determined efforts and Apple’s long-term vision. Apple is expected to launch the headset in early 2023.

Congress has rejected the US military’s request to buy up to 6,900 headsets based on Microsoft’s HoloLens technology, according to a report. Apparently, the gun was asking for about 400 million dollars. Instead, it will take about a tenth to improve the system, as previous versions would have caused physical disabilities that affect the mission, such as headaches and nausea during testing.

HoloLens is an augmented reality headset launched in 2016 by Microsoft that simulates holograms. It was first revealed at the Windows 10: The Next Chapter conference on January 21, 2015.

The Microsoft HoloLens headset embeds a computer running Windows and has 3 processors. It is capable of simulating holographs without the need to connect to the Internet. HoloLens adapts in several areas and keeps pace with the evolution of the augmented reality market. It competes with Oculus and HTC Vive among others.

Microsoft originally signed a contract with the military to develop modified HoloLens combat goggles in late 2018. The deal, worth $480 million, eventually led to infighting within the military company, with some employees believing their work was being used to spread violence abroad. than helping people. The HoloLens division has also seen its share of turmoil at Microsoft, after AR glasses creator Alex Kipman left the company in June after allegations of sexual harassment surfaced.

In the end, pressure from within did not prevent the military agreement from being reached. Microsoft CEO Satya Nadella defended the decision in early 2019, saying it was a principled decision made to help protect the freedoms we enjoy. According to one report, the military could spend as much as $21.9 billion over the next decade on the IVAS program, including maintenance costs.

The military said in October 2021 that it would have to delay the deployment of the device, however, pending further evaluation by the Pentagon.

The augmented reality glasses, a customized version of the HoloLens, provide the user with a heads-up display, meaning a hologram is superimposed over their environment, giving them more information about what they can already see. .

The order for 5,000 glasses was originally placed in March 2021, but was put on hold due to concerns about their performance. A final test of the glasses was not expected until October 2022, but Bush said at the time, “The Army remains confident that the program will be successful.” 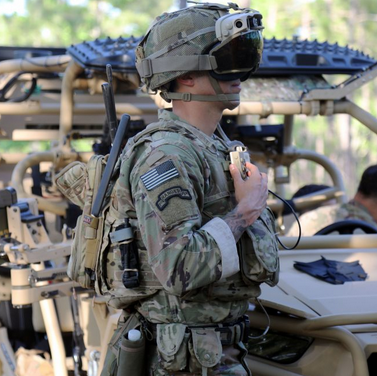 An April 22 audit report from the Defense Department’s Office of the Inspector General put further pressure on the project by finding that the military had not defined a minimum viable product in terms of what soldiers would accept. Acquiring IVAS without gaining user acceptance could spend up to $21.88 billion in public funds to set up a system that soldiers may not want to use or may not use as intended, the report says.

But a summary, by Nickolas Guertin, director of test and evaluation operations at the Ministry of Defence, describes the tests leading to “mission-impacting physical disabilities”, in particular headaches, eyestrain and nausea. The summary shows that more than 80% of soldiers who experienced discomfort with Microsoft’s customized version of the headset experienced symptoms within three hours. Bloomberg did not say what percentage of HoloLens testers felt overall discomfort.

Acceptance of the technology remains low, according to a summary prepared for Army and Defense Department officials, with soldiers complaining that the helmets do not help their ability to carry out their mission.

One of the testers thinks the devices would have killed us. In words, the light emitted by IVAS, which give the location of their carrier “hundreds of meters”. Testers also found that soldiers’ field of vision, including peripheral vision, is limited when the headset is on, and that the bulk and weight of the device restricts soldiers’ movement.

What do you think ? In your opinion, does Microsoft not believe in the metaverse? To what extent?