US federal authorities on Wednesday arrested the founder of Bitzlato, a cryptocurrency exchange they say was a financial haven for criminals involved in ransomware and illegal drug sales on the dark web.

Anatoli Legkodymov, a 40-year-old Russian national living in Shenzhen, China, was arrested in Miami on Wednesday, US prosecutors said, as part of a major crackdown jointly announced by Washington and Paris.

Prosecutors alleged that under Legkodymov’s supervision, Bitzlato processed cryptocurrency transactions worth approximately $4.58 billion, and that a significant portion of these transactions constitute proceeds of crime, as well as funds intended for use in criminal transactions. Bitzlato is known as a Virtual Asset Service Provider (VASP).

On Wednesday, January 18, US judicial authorities announced the arrest of Anatoli Legkodymov, a Russian resident of China, suspected of being the founder of Bitzlato. This crypto exchange is suspected to be one of the money launderers from cyber crime activities.

According to court documents, Legkodymov is a senior executive and majority shareholder of Bitzlato Ltd. (Bitzlato), which is registered in Hong Kong and operates worldwide. Bitzlato is said to require minimal identification from its users, stating that neither selfies nor passports [ne sont] is required. In some cases, when Bitzlato asked users to submit credentials, it repeatedly allowed them to provide information that belonged to straw loggers.

Due to these deficient Know Your Customer (KYC) procedures, Bitzlato is said to have become a haven for proceeds of crime and funds intended to be used in criminal activities. Bitzlato’s largest counterparty in cryptocurrency transactions was Hydra Market, an anonymous and illegal online marketplace for narcotics, stolen financial information, fraudulent identity documents and money laundering services, which was the largest market and the oldest dark web in the world. Hydra Market users traded over $700 million in cryptocurrencies with Bitzlato, either directly or through intermediaries, until Hydra Market was shut down by US and German law enforcement in April 2022. Bitzlato also received over $15 million in ransomware revenue.

Hydra had been in business since at least 2015 and had seen meteoric growth since then. In 2020, it had annual revenue of over $1.37 billion, according to a 2021 report jointly released by security firm Flashpoint and blockchain analytics firm Chainalysis. In 2016, the companies said Hydra had revenue of just $9.4 million. This is what the German authorities have declared the site had 17 million customers and over 19,000 registered seller accounts.

As alleged in the complaint, Bitzlato customers regularly used the company’s customer service portal to request assistance with transactions with Hydra, which Bitzlato often provided, and admitted in conversations with Bitzlato staff that they negotiated using nominees. Additionally, Legkodymov and other Bitzlato officials knew that Bitzlato’s accounts were plagued with illegal activity and that many of its users had registered with other people’s identities. For example, on May 29, 2019, Legkodymov used Bitzlato’s internal chat system to write to a colleague that Bitzlato users were known to be fraudsters, using other people’s identity documents to register their accounts. Legkodymov was repeatedly warned by colleagues that Bitzlato’s clientele consisted of drug addicts who buy Hydra drugs and drug traffickers, with one senior manager even stressing that Bitzlato should only nominally fight drug traffickers to avoid harming the latter of the company. An internal chart stored in Bitzlato’s shared management file summarizes the company’s view of itself: Pros: No KYC… Cons: Dirty money… .

Five other men, mostly of Russian and Ukrainian nationality, were arrested in Spain, Portugal and Cyprus as part of an operation led by French gendarmes. Another suspect must be arrested soon and the last one is on the run, according to a source close to the investigation, opened in September 2022 by French justice.

All are suspected of having participated in the creation and development of the Russian platform Bitzlato, which allows the rapid conversion of crypto-assets such as bitcoins, ethereum, litecoins, bitcoins cash, dashes, dogecoins and USD bonds into rubles, specified the prosecutor of Paris Laure Beccuau in a press release.

Also noted is the judicial seizure of the country and 16 million euros of criminal assets in France. Bitzlato used at least one host in France from which the company rented dedicated servers, the Paris prosecutor’s office explained in a press release. 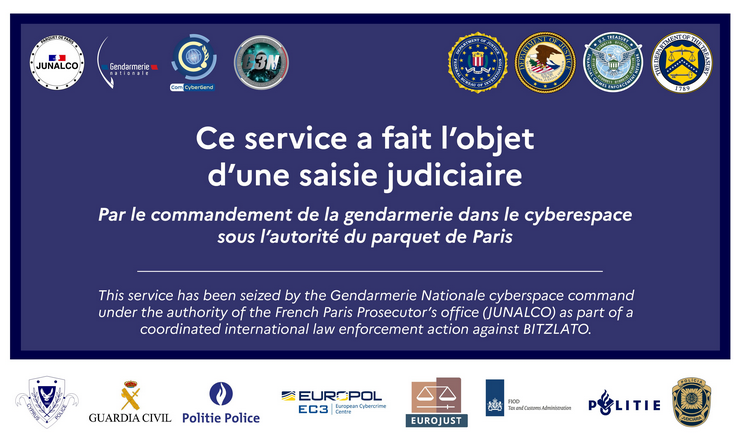 250 agents participated in this operation, according to the press release of the Ministry of the Interior

This is the story of an investigation that goes far beyond the borders of France and plunges us into the darkest corners of digital technology. A year ago, as part of the European action EMPACT, the Gendarmerie Command Cyberspace Operations Division (ComCyberGend) dealt with a criminal organization suspected of offering since 2018 digital financial services that facilitated crypto-asset transactions of different types and their conversion into rubles.

A particularly technical mechanism that requires different expertise. We have set up a national investigative unit consisting of 50 gendarmes with investigators from ComCyberGend and various gendarmerie regions, experts from ComCyberGend’s Technical Division, analysts from the Central Criminal Intelligence Service of the National Gendarmerie (SCRC), or even specialized cyber investigators in crypto-assets (FINTECH), lists Major General Marc Boget, head of ComCyberGend.

Through complex investigations carried out with the support of EUROPOL, this shocking team manages to decipher the workings of what turns out to be a huge digital cleaning machine. Bitzlato is an exchange platform, unscrupulous in terms of the identity of customers and the origin of funds, which allows criminals to clean crypto-assets resulting from various criminal activities (pedocrime, ranongware, drug trafficking, etc.) on order . And this online laundromat is particularly profitable as transactions are valued at more than $2 billion as of 2018.

As part of the preliminary investigations carried out by the National Jurisdiction for the Fight against Organized Crime (JUNALCO) from last September, this Wednesday, January 18, a judicial operation coordinated by the French Cybergendarmes and EUROPOL has been launched. It specifically targets the creator of the platform and its associates implicated in acts of participation in a criminal association, money laundering in an organized gang, cooperation in extortion in an organized gang and cooperation in attacks on Automated Data Processing Systems .

A total of 250 officers participated in this extraordinary operation. The service provided by the Bitzlato company was immediately discontinued. Also, in cooperation with the prosecution and the Agency for the Management and Recovery of Seized and Confiscated Assets (AGRASC), the investigators seized the domain name, more than 16 million euros in the form of crypto-assets, the amount of 27,000 euros. and $31,000, as well as three vehicles. This operation is a blow to the cryptocriminal ecosystem and responds to the crisis of confidence in the cryptocurrency markets, said US Deputy Attorney General Lisa Monaco. Indeed, if this is a first in Europe, as General Boget points out, the cyber investigators do not intend to stop there.

Comments from the American side

Institutions that trade cryptocurrencies are not above the law and their owners are not beyond our reach,” said US Attorney Breon Peace. Bitzlato allegedly sold itself to criminals as a no-questions-asked cryptocurrency exchange platform and collected hundreds of millions of dollars in deposits in the process. The defendant is now paying the price for the nefarious role his company played in the cryptocurrency ecosystem.

Today, the Minister of Justice has dealt a major blow to the crypto-crime ecosystem, said Lisa O. Monaco. Deputy Attorney General for the Department of Justice. Overnight, the minister worked with key partners at home and abroad to disrupt the operations of Bitzlato, the China-based money-laundering engine that fueled a high-tech crypto-crime hub, and to lock up its founder, the Russian national Anatoly Legkodymov. Today’s actions send a clear message*: If you are breaking our laws from China or Europe, or abusing our financial system from a tropical island, you can expect to be held accountable for your crimes in court.*

“As alleged, the accused helped operate a cryptocurrency exchange platform that failed to implement anti-money laundering safeguards and allowed criminals to profit from their wrongdoing, including advertising and drug trafficking,” said the Deputy Attorney General. Polite. The National Cryptocurrency Enforcement Team’s extensive efforts to disrupt Bitzlato and arrest the accused show that we will continue to work with our partners – foreign and domestic – to combat cryptocurrency-fueled crime, even ” they cross international borders”.

The FBI will continue to pursue actors who try to hide their criminal activity behind keyboards and use tools such as cryptocurrency to evade law enforcement,” said FBI Deputy Director Turner. We, along with our federal partners and international, we will work tirelessly to disrupt and dismantle these types of criminal enterprises. Today’s arrest should remind us that the FBI will impose risks and consequences on those who engage in these activities.

Sources: US Department of Justice, French Minister of the Interior

Hydra, the world’s largest cybercrime forum is no more. Closed as part of a police operation