The Central Bank of Iran is considering the possibility of creating, with Russian participation, a digital token to facilitate trade in the Persian region, according to a report citing the head of the crypto industry organization in the Russian Federation. Stablecoin can be accepted as a means of payment in international settlements, the executive director of the Russian Association of Crypto-economy, Artificial Intelligence and Blockchain (Racib), Alexander Brazhnikov, told the business daily Vedomosti. Russia and Iran, both under Western economic and financial sanctions, have turned to crypto-assets as a means of circumventing restrictions.

John J. Ray III, now FTX’s chief executive, said that despite the allegations against Sam Bankman-Fried and other executives, customers praised FTX’s technology and said it could be worth the price. “It’s all on the table,” Ray said. “If there’s a way forward for this, then we’re not just going to explore it, we’re going to do it.” FTX’s token, FTT, surged 33% following the news. The decision would come down to whether restarting the international FTX platform would recover more funds for customers than simply liquidating assets or selling the platform, Ray said. This strategy could also be to send a positive signal to the market, which would have the effect of revaluing FTX’s assets in order to sell them at a better price to pay off creditors. But in this case, we would be approaching market manipulation…

As a reminder, in the summer of 2022, MakerDAO, a decentralized finance platform supported by the Ethereum blockchain, added to its portfolio the digital asset-focused subsidiary of the bank, Societe Generale – Forge (SG-Forge). vault with a credit limit of $30 million in DAI stablecoins. The vault is backed by 40 million euros of bonds in the form of “OFH tokens” – securities in the form of tokens issued on Ethereum and backed mainly by real estate loans rated AAA by Moody’s – which makes the loans over-guaranteed. Therefore, Société Générale’s crypto arm used its vault by borrowing $7 million in DAI stablecoin. A strong sign of the presence of traditional financial entities in decentralized finance.

“Genesis could be on the verge of filing for bankruptcy as early as this week,” it said Bloomberg earlier this week. The cryptocurrency lender, which is ultimately owned by Digital Currency Group, has found itself in a precarious financial position after suffering exposure to a number of previous bankruptcies. Not only was Genesis hit hard by the loss of Three Arrows Capital ( 3AC ), it was stripped of $175 million after FTX’s collapse. It now owes $900 million to 340,000 Gemini Earn customers, and there was no indication that a deal had been reached. Withdrawals have been suspended at Genesis since November — a move that often serves as a harbinger of impending bankruptcy proceedings. Not to be outdone, the company filed for bankruptcy yesterday and says it has more than 100,000 creditors and debts of $1 billion to $10 billion.

According to a recent one Chain study, Illegal financial transactions involving cryptocurrencies in 2022 reportedly increased for the second year in a row, reaching $20.1 billion (digital assets facilitated prosecutions worth $18 billion in 2021). 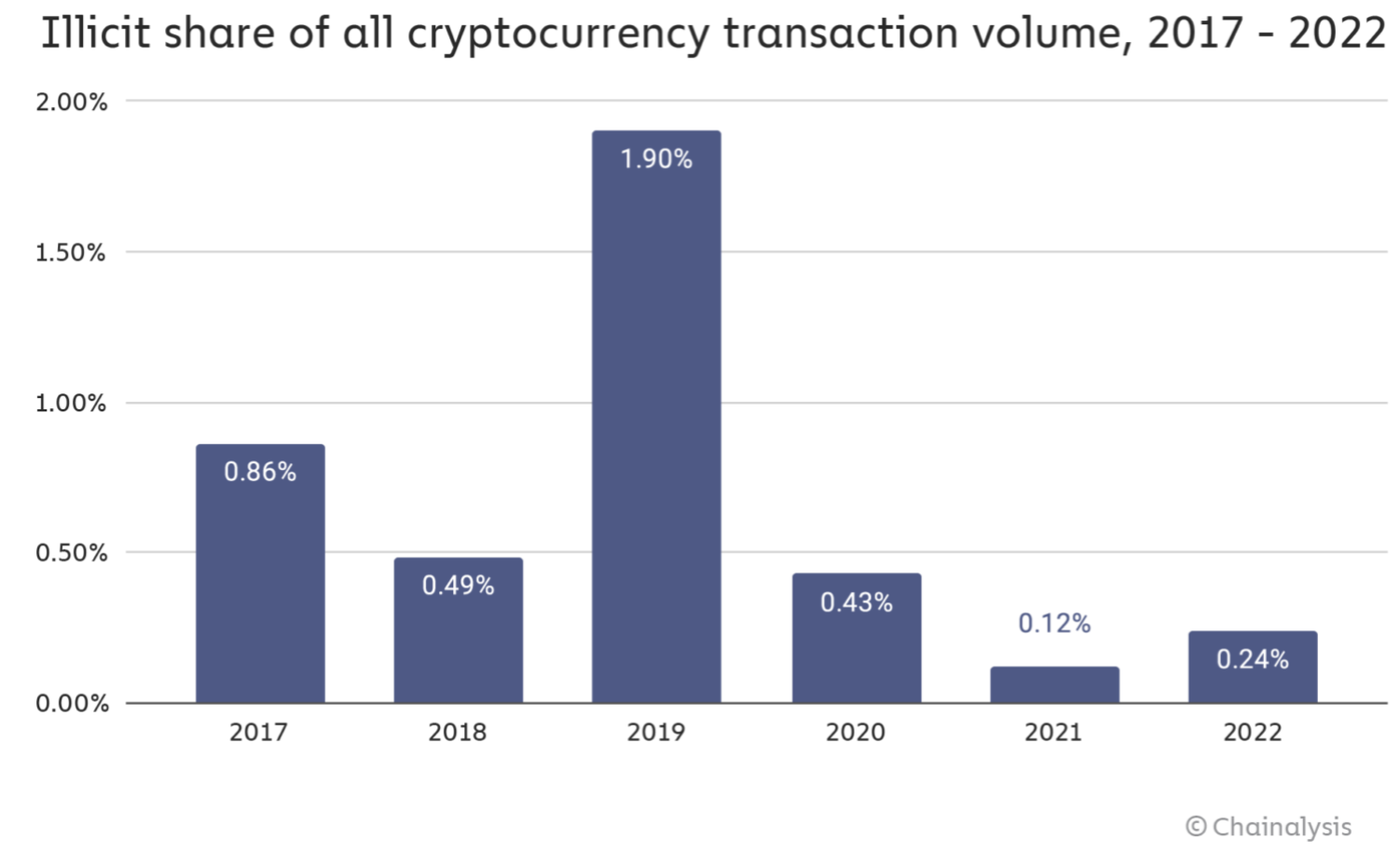 The percentage of illegal transactions compared to the total volume

However, this data does not take into account all illegal activities outside the blockchain. Typically, scams related to companies that collapsed in 2022 such as Three Arrows Capital, FTX or even Celsius are not fully considered in the analysis. Also, simple cryptocurrency transactions involving payments for drugs, for example, appear as a single transaction on the blockchain, so it is difficult to quantify all illegal transactions. However, this gives an overall trend of fraud on the chain, which remains relatively low compared to some trusted coins.

Block 2: Cryptic analysis of the week

After living a chaotic year on the cryptosphere side, going through the catastrophic performance of digital assets, then through the massive arrests of fraudsters 3.0 and finally through the collapse of many platforms (Three Arrows Capital, Celsius, FTX, Genesis… ), among other, the crypto industry is back at the World Economic Forum in Davos. So this event was an opportunity for actors in the country to restore the image of cryptocurrencies withof billionaires, bankers and heads of state?

So, it already goes through an omnipresence of crypto industry players in Davos, through official billboards, city shops, cafes, yoga studios, cryptosphere promotional event spaces were everywhere. Representatives of the company Tether, the issuing company of the main stablecoin (a widely used cryptocurrency tied to the US dollar) in terms of capitalization, USDT, even handed out free pizza at a conference. You can say a little light to restore the image of the cryptosphere.

Circle, the issuer of the world’s second largest stablecoin, USDC, has doubled its investment to mark its presence at Davos. Beyond their presence in the windows of La Promenade where the Circle building carried the slogan “Solving Real World Problems”, the speech focused on themes such as trust and responsibility, while qualifying the period after Luna-3AC-Celsius-FTX-Voyager- The Genesis of the Great Restoration. But many remain skeptical about the topic of crypto, especially those in government and traditional finance.

“It feels like a last gasp for crypto,” said Harvard University economist Jason Furman, a former adviser to President Barack Obama. The real estate market has never been hotter. You know, these people paid for this ad six months ago, and from when it came out, it was just wrong. It’s crypto in Davos,” he added.

Hilary Allen, a law professor at American University, took a slightly less threatening tone, but still without a hint of optimism. “What the crypto industry really wants is to be created — to be integrated into mainstream finance, to be regulated, but on its own terms.”

There have been fewer words than one might expect about Sam Bankman-Fried. The 30-year-old fallen weirdo has become an all-purpose con artist whose name should only be mentioned as a warning. Ultimately, judging by the trend of the conversation at Davos — where the word “tokenization” was uttered with remarkable frequency by people ranging from finance ministries to buy-side corporations — the overall message was this: Many people want own and control their data. , including their assets, and blockchain isn’t just about memecoins and scams.

Oh yeah, and the orange bitcoin Mercedes belonged to Michael Chobanian, the founder of Kuna, which is the name of a Ukrainian cryptocurrency exchange. Block 4: Readings of the week

The owners of Metaverse create a new class system (By wire)

AI is not the new crypto (The Atlantic, in English)

Cryptocurrencies are in crisis, but they are not going away (Conversation, in English)