The Regulatory Authority of Electronic Communications, Posts and Press Distribution (Arcep) published, on June 30, 2022, a report on the state of the Internet in France in 2021. 51% of traffic for French Internet Service Providers (ISP) customers came from video content, while Netflix receives 20% of traffic. A rather surprising figure when you know that the streaming platform is on loss of speed.

Apart from Netflix, video content consumed comes mainly from Google (and more specifically YouTube), FacebookAmazon (through its streaming platform, Premium Video) or even Akamai, a content delivery network (CDN) that allows the storage of large files (such as videos) and their distribution via servers geographically closer to users.

In the same category
Meng Wanzhou, the financial director of Huawei, will soon be released by the American justice?

For more than ten years, telecom operators have had the ambition to make broadcast platforms contribute, as well as GAFAM, financing their telecommunications networks. These companies consider that their infrastructures contribute a lot to their success.

In May 2022, Thierry Breton, the European commissioner for the internal market, announced that he was in favor of broadcasting platforms helping telecom operators in this regard. He recognized the need to create new regulations, different from those that have existed for more than twenty years. The European Law on Connectivity Infrastructures, possibly planned for the beginning of the school year, may make it possible to incorporate these new directives.

However, thirty-four non-governmental organizations (NGOs) from seventeen European countries (but not France) wrote and signed a letter to the European Commission. The purpose of this is to alert the European institution to the threats that depend on the implementation of such an initiative. Indeed, these NGOs consider that ISPs could ask to be paid twice for the same service, which would jeopardize net neutrality and distort competition.

5G, global traffic, mobile internet quality: the state of the internet in 2021

Overall, traffic to major ISPs in France increased by more than 25% in 2021 compared to 2020. In terms of mobile internet quality, download connection speeds on 2G, 3G and 4G reach a average of 71 Mbit/s in 2021 compared to 49 Mbit/s last year. This improvement in flow quality is explained by a decrease in velocity observed in 2020, partly due to the health context related to Covid-19.

As for the implementation of 5G, there is still a lot to do. Even with the arrival of 5G, the average download speed is struggling to increase, or even drop on some ISPs. It is explained by 5G deployment plan which tries to satisfy users in every area, whether dense or not, and which takes time to be effective. 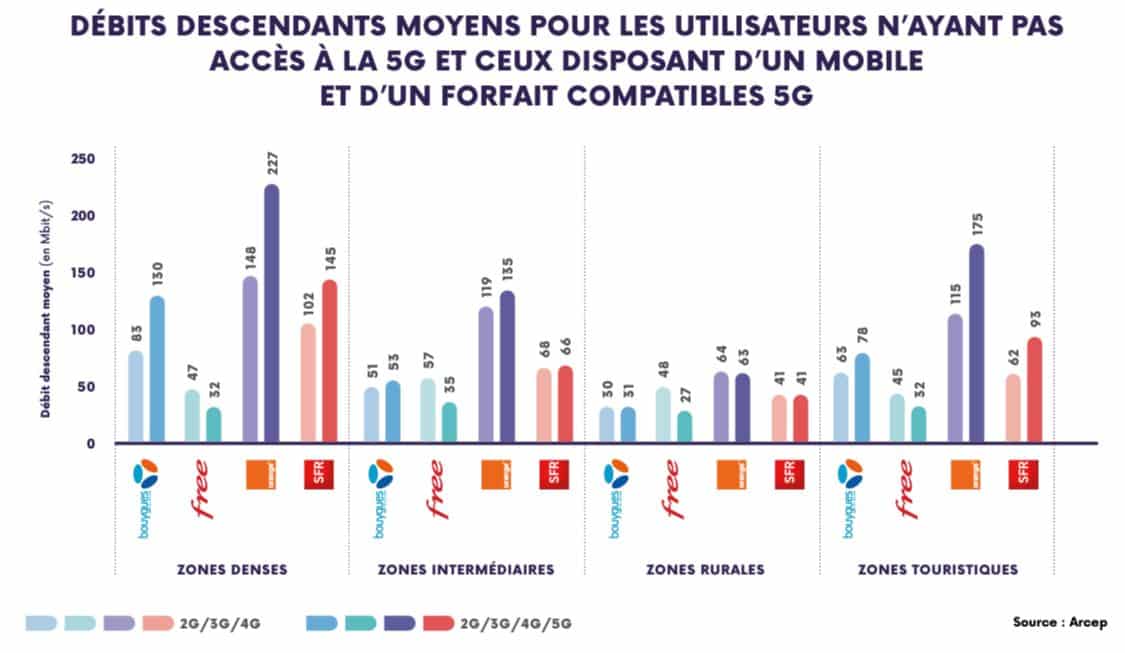 Overall, Orange is the ISP that offers the best download speed, followed by SFR and Bouygues Telecom. Free brings the rear. Screenshot: Arcep.

Finally, Arcep turns to the deployment of IPv6, one of the protocols that allows the transfer of data packets in computer networks. Unlike IPv4, IPv6 makes it possible, for example, to generate a very large number of unique IP addresses. In early June 2022, France passed the bar of 50% of users with Internet access offering IPv6 enabled.

During the month of July, Arcep will decide one of its main measures: the implementation of a ” login ID card » in internet boxes. This application programming interface (API) aims to better characterize the measurement environment » internet traffic.