On the sidelines of the Snapdragon 8 Gen 2 launch, Qualcomm announces two new components dedicated to audio headphones: the S3 Gen 2 and the S5 Gen 2. Taking advantage of the improvements made in the Snapdragon 8 Gen 2, these two components are full of new features for TWS headphones: low latency, in-game sound feedback, lossless quality, spatial sound with motion detection, or even Auracast compatibility.

Qualcomm is hosting the Snapdragon Summit this week, its annual conference where the American firm presents its new components and the innovations they include. Last night we talked Snapdragon 8 Gen 2, the new high-end SoC aims to animate the vast majority of flagships in 2023. Improvements are in photography, video, video games, connectivity, sound and above all artificial intelligence, as the latter intervenes everywhere.

On the sidelines of the Snapdragon 8 Gen 2 launch, Qualcomm is taking the opportunity to announce some innovations in other areas: processors for Windows PC under ARMchips for virtual or augmented reality headsetas well as components for audio equipment. It is this last area that interests us in this article. However, be aware that we will spend some time on other topics as well.

In the field of audio, Qualcomm announces this year a “complete solution” called Snapdragon-Sound. This umbrella includes the S3 and S5 chips that the firm revealed in early 2022, AptX codecs and connectivity. The difference between the S3 and the S5 is basically the functional completeness between the two, the S5 being more complete and meant for more expensive accessories. Of the brands using the S5, you find Bose.

At Snapdragon Summit 2022, Qualcomm unveils S3 and S5 successors: S3 Gen 2 and S5 Gen 2. The main innovation of its two SoCs is full support for the audio innovations of Snapdragon 8 Gen 2. This includes in particular spatial audio and head motion detection of the user (which relies on headset accelerators). The goal here is to provide an Apple-like experience AirPods and iPhone/Mac.

The S3 and S5 chips have a new Adaptive Transparency mode

Another new feature is support for voice chat with smartphone games. So far, microphones are not accessible when playing on mobile. Thanks to this new feature, it will be possible to chat during games with other players using headset microphones, as has been done for years on PC and consoles. 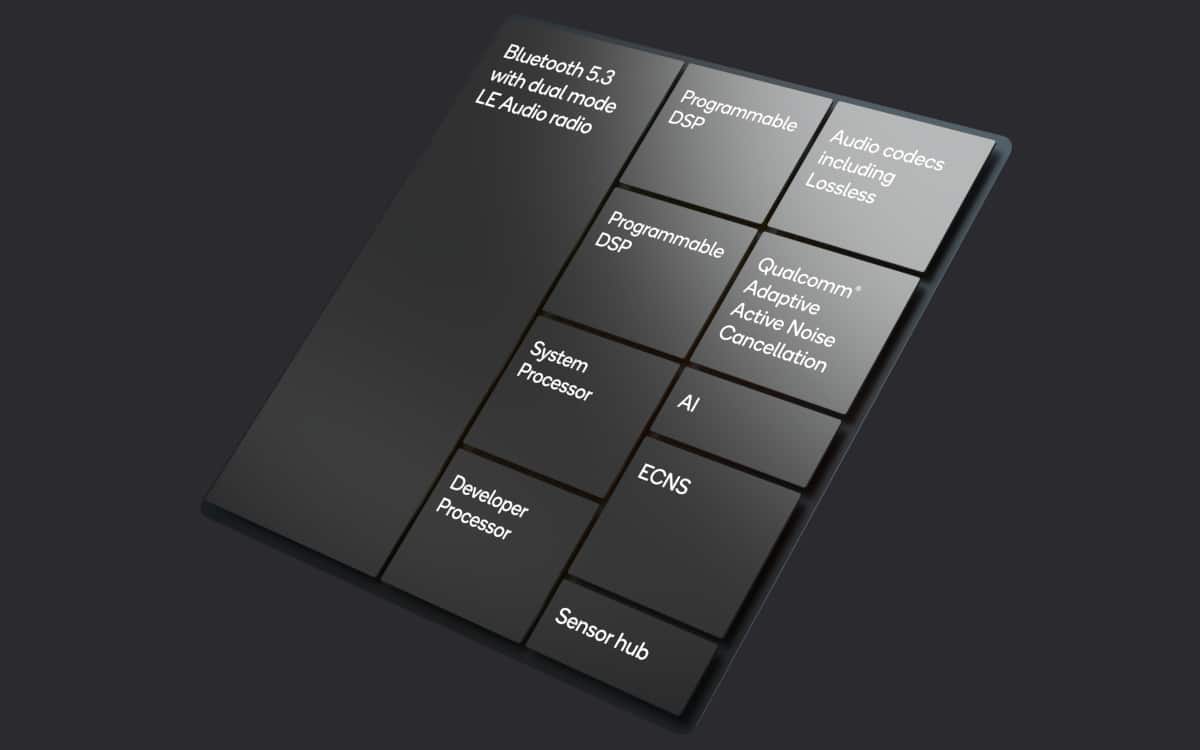 The two new platforms also benefit from the latest version of active adaptive noise reduction developed by Qualcomm. This new version certainly improves ambient noise reduction. But it also includes a new way of calling Adaptive transparency. The principle is the same as adaptive reduction: the function detects an audio change (such as the start of a voice conversation) and adapts the strength of the reduction. Samsung offers this kind of feature with the Galaxy Buds. Qualcomm hopes to generalize this.

Qualcomm cuts the latency of TWS headphones in half

The S3 and S5 Gen 2 also benefit from several improvements to existing technologies. Most importantly, we believe, is the drastic reduction in latency between when a sound is created in an app and when you hear it through TWS headphones. Qualcomm claims to have reduced it to 48ms, compared to 68 ms with previous audio chips. Without these chips, the delay usually reaches 90 ms. An improvement that will be appreciated if you are a gamer or watch a video on your mobile.

Among other improvements, you find the improvement of lossless codec for TWS headphones and support for the LE Audio standard that includes compatibility with Auracast which allows multiple pairs of headphones to be connected to the same smartphone. Of course, some new features can only be activated with smartphones equipped with Snapdragon 8 Gen 2. Qualcomm announces that the first samples of S5 and S3 Gen 2 have arrived to its customers. The first equipped products are not expected in advance second half of 2023.