with the saga FIFA, EA has undeniably captured the hearts of sports and video game fans by making this license a classic that touches all audiences, regardless of the evolution of the license. However, the divorce between FIFA and Electronic Arts was formalized this year with a clear challenge for the International Federation: to reclaim its name to exploit its influence in the lucrative video game sector. It didn’t take long to find out more clearly what FIFA’s first projects are in the world of video games.

With the 2022 FIFA World Cup Qatar just around the corner, FIFA has just released a press release detailing more clearly its first plans for the games now that Electronic Arts no longer has the rights to play the game. prestigious license.

“Gaming and eSports are among the fastest growing opportunities for FIFA as it continues to expand into new digital spaces, platforms and games that already welcome football fans into them.

New game integrations, all designed with web 3.0 and the future of digital engagement in mind, can be played throughout the tournament and each brings a unique twist to the world’s biggest football tournament.”

We might have suspected it, but now the information has been confirmed as FIFA will directly start developing projects based on blockchain, metaverse or even AI.

Altered State Machine announced that the game will launch with a 10-week prediction component. “Numerical and physical prices” would be the key for those who correctly predict real-life matches. Players who participated in the prediction game could win “four unique collections” that would become their AI-controlled players in the FIFA World Cup AI League.

With this first data, we can think of a formula similar to Volta, in which you can manage and manage the team only by acquiring different players that the AI ​​would control.

The second game would be made with Uplandme and take place in Upland’s blockchain-based metaverse, where players buy and sell virtual properties. It would therefore be similar to a collaboration made with FIFA on the occasion of this World Cup 2022. Players can collect “official digital assets of the FIFA World Cup, including legendary videos of the main moments of the tournament”. Of course, a stadium and a virtual village will be present and you can buy digital items in the village.

This third game is a collaboration with the also metaverse-focused mobile app Phygtl if their site is to be believed (nothing specific, just a tease). According to the description, “fans can wave a golden ball from the palm of their hand in their real-world environment, own a limited edition piece to join and immortalize their curated FIFA World Cup photos and videos .” on the panel. In FIFA’s words, a “digital representation of lifelong fans”.

Finally, we reveal Matchday Challenge: FIFA World Cup Qatar 2022 Edition, which is said to be a “highly engaging casual social prediction game based on football cards”.

The divorce between FIFA and EA is still fairly recent, but one has to believe that FIFA already had a very clear idea of ​​the direction it wanted to take for its entry into the game. was chosen with the comprehensiveness of the metaverse and digital in mind. collections (they can say NFT now, it will go faster). 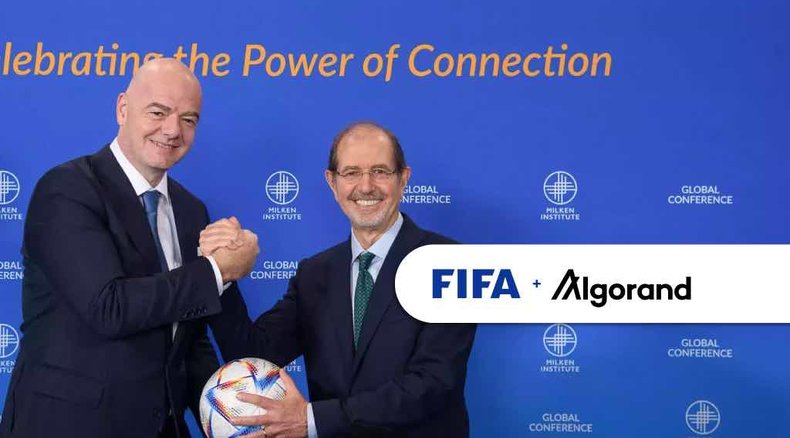 FIFA enters partnership with cryptocurrency company Algorand in May 2022

Last May, FIFA president Gianni Infantino had this to say about FIFA’s game plans:

“I can assure you that the only authentic, real game that bears the FIFA name will be the best available for football players and fans.

The FIFA name is the only global and original title. FIFA 23, FIFA 24, FIFA 25 and FIFA 26, and so on – the constant is the name FIFA and it will remain forever and remain the BEST”.

Having presented these first projects, it is difficult to believe in FIFA’s credibility in this field which it does not know, especially in front of football fans. After 30 years of partnership, EA Sport will rebrand its license EA Sports FC with “a new era in July 2023” and finally, it seems that EA is the most reasonable and quality studio for football games on the market. current, in relation to this exact context of course. FIFA is said to be working with “leading game publishers, media companies and investors” to develop a new FIFA soccer simulation game for 2024, which would compete directly with EA Sports FC.