On the occasion of its Tech Industry Days, Renault unveiled its industrial metaverse, where all the group’s factories are digitally reproduced. Which generates more than a billion data per day to optimize their operation. This translates into lower costs: 780 million euros have already been saved, improving quality.

Renault has invested 225 million euros over 5 years to set up this industrial metaverse.

On the occasion of “Technology Industry Days”, the group Renault revealed, at the Flins factory (78), an industrial metaverse project launched in 2016. The manufacturer is also presenting this as a world first. All of its factories in the world now have a digital twin, and more than a billion pieces of data are uploaded to a European Google cloud every day.

To establish this virtual reality, Renault has invested 225 million euros over 5 years and the results are already visible with 780 million savings already achieved. But as data, more and more numerous, economies will also progress.

By 2025, Renault estimates that this new world will allow it to save more than 320 million in overhead costs, especially in production, and 260 million euros in inventory. A device that will also be a tool for the brand to reduce the CO2 footprint per vehicle by 50% and speed up delivery times by 60%.

With quality improvement also being part of the equation, the manufacturer also hopes that warranty costs will drop by 50% and, from an industrial point of view, faster implementation of new technologies for 40% less.

The system is sold to other manufacturers

In fact, all the objects that make up a factory are connected, but above all they speak the same language, once the data is collected. For example, 8,500 devices ranging from a simple screwdriver to a robot welder, but also 107 presses, 172 machining centers or even 15 air extractors from paint booths feed the cloud.

This metaserver looks to bring production monitoring into a new era with continuous optimization. The potential applications are still many to come with the addition of a dose of artificial intelligence, which will quickly develop with the wealth of data collected. Quality control will be acquired as training.

Renault has partnered with Atos to sell the data collection solution to other business sectors such as rail, aeronautics, etc. Called ID@Scale, this solution is “for sale” as of June 2022, and Atos says it has already signed one customer. By 2027, the Renault-Atos association hopes to reach a turnover of 49 million euros with 18 active customers.

Fast track thanks to the metaverse

But this metaverse doesn’t stop at the factory gates. Indeed, the supply chain is also scrutinized. The control centre, currently in Vélizy (78) but soon to be joined by the Technocentre in Guyancourt (78), also monitors 6,000 trucks a day to better anticipate supply and therefore production problems. This “surveillance” will last for months, and the builder hopes to soon be able to track the boats. 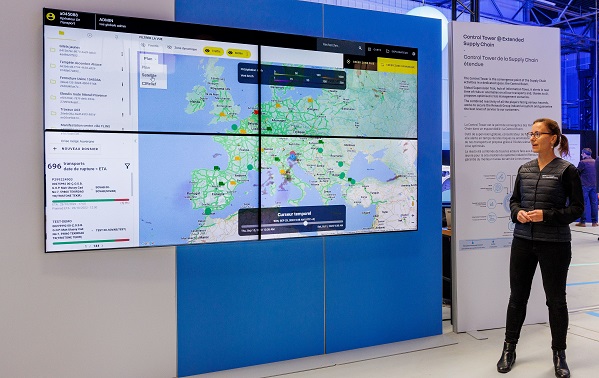 But this forest of data does not stop upstream. In fact, downstream data is also used, until the vehicle is delivered to the dealer. For example, this affects delivery times, which are always faster. The first concrete thing done in this area is the implementation of Fast Track. Indeed, Renault offers Arkana or Captur in quick deliveries based on this system. But impossible to know how many days have been gained.

More broadly, on the topic of reducing energy consumption, also at the center of this virtual world, Renault recalled its decarbonisation schedule. If the European target of carbon neutrality is set in 2030 (2050 worldwide), the Electricity group will be neutral thanks to the use of 75% of renewable energy from 2025.

The Douai area (59) will be able to count on deep geothermal energy (4 km, made with Engie) with water at 130 degrees. That of Maubeuge (59) will use biomass (with Dalkia-EDF). These two systems will cover 70% of the heating needs of the two countries and, for the remaining 30%, Renault will use biogas methanation.

Even in this power management, the metaverse has its uses. Indeed, with EcoGy, a software that allows to track all consumption data of 24 factories, Renault can plan consumption (and buy cheaper energy) but also monitor abnormal things. For example, in a factory, the dashboard makes it possible to see in real time the consumption of identical machines, and if one consumes more than the others, an alert is given to adjust them so that they all consume the same.

Consumption management which has already made it possible to save 12% in 2022 and the objective is to reach 30% in 2025. To complete this energy chapter, Renault should soon announce a photovoltaic installation in France which will cover 50% needs. A project like the one already signed in Spain, with Iberdrola, covering the needs of Spanish countries with 600 GWh of carbon-free electricity thanks to photovoltaics.