Jacques Tange in his new gallery – (below) the old Tange building at Schie 50; photos: Jan Schrijver

SCHIEDAM – The ‘Bible House’ at Lange Haven 70 – the building next to the Havenkerk – will be Jacques Tange’s new gallery. In a month, Jacques and Belinda hope to have finished the renovation work, so that the public can be received. The official opening is scheduled for early September.

Boei is the owner of the Havenkerk and the adjacent Bible House (connected to it by an inner gate). The building was once built as a block factory for shipping. In 1919 it was purchased by the church to serve as a patronage building. After the purchase of the church and the Bible house, Boei has radically renovated Havenkerk in recent years. The church is now used for events. Fun-key Events of Schiedam is responsible for the operation of this venue for events.

The House of the Bible also needs to be completely renovated architecturally. This important renovation will not take place at the moment. Jacques and Belinda Tange can now move in with their Galerie Jabelle. The back of the building is not yet usable. The rear is braced with various stabilizers and beams. This back part is closed from the front part. The front part can already be used for the gallery.

When we had coffee with Jacques and Belinda just before Pentecost weekend, the ground floor was full of works by the artist. Over the Pentecost weekend friends came to help move the works upstairs. “We already know how we are going to paint the walls, which will be a beautiful blue-gray color, a color that Jacques often uses in his works,” Belinda lifts a corner of her veil. “You also see a cove on the left. We have a special color in mind for that and a special destination, but we’ll keep that under wraps for a while, it’ll be fun.” The old roof is damaged. “We solved this by stretching a roof under it. This is a clever, affordable and quick solution that also looks classy and good,” says Jacques.

Initially, Jacques and Belinda’s intention was to remain established with the gallery and studio in the building they had rented at Schie 50. They wanted to buy and radically renovate this historic building and then live there as well. Jacques and Belinda had already made design drawings for him. “The municipality sold the property to Van Wijnen earlier this year (Van Wijnen is the company that is involved in building houses in the Dirkzwager area, ed.) on the condition that they offer it to us. Well, that has However, we feel that the asking price of €825,000 is disproportionate, in addition to the fact that we would have to demolish a number of outbuildings at our own expense and pay for soil remediation afterwards.Furthermore, the building we renovated might not be legally divided. This would be necessary because we wanted to have our house and our commercial space for a gallery and studio there. The plan was that it would also be the cultural center for the new residential area that was planned.” Belinda adds: “But asking for 825,000 euros for a property whose value, according to the appraisal we had done, was between 3 and 4 tons, seemed too much to us.”

Jacques and Belinda have now opted for a different solution. The studio has recently been established at Tuinlaan 76 in the De Moluccas building. Fun-key Events pointed the couple to the possibility of renting the Bible House. “It was a setback that we didn’t find it financially feasible to buy the property in Schie, but we think we’ll get something positive in return,” Belinda replies. “And it’s also good for the city, I think this building in Lange Haven is a gallery,” adds Jacques. “This part of the city will become a cultural and creative hotbed. We have all kinds of ideas. For example, our big concert is now in the Havenkerk. We can start organizing concerts. We already get from passersby who see some paintings behind from the window, even before we’re ready inside and we can get people, positive reactions.

Jacques and Belinda had wanted to say goodbye to Schie 50 in a festive way with a closing exhibition entitled ‘Schienale’. The Schienale went ahead, but the festive character was spoiled. A few weeks ago, the couple had gone shopping in preparation for the Schienale and bought three cases of wine, among other things. Those boxes had just been taken out of the car and placed in the building at 50 Schie, Jacques and Belinda were visited by municipal supervisors. “Now we have received an official administrative warning from the municipality by letter. We are not allowed to serve alcoholic beverages in a gallery, we are not even allowed to have alcoholic beverages in our gallery,” says Belinda. “In our 35 years of experience as a gallery owner, we have never seen this as a problem,” says Jacques.

Belinda: “It turns out that we are allowed to serve a glass of wine or a beer a maximum of six times a year, and we have to apply for a section 35 permit, with a detailed description, including a map. It’s not just the extra paperwork, but You also can’t manage as a gallery owner with six times a year what you can do is hire a vendor who has a permit but that adds costs this could also be a problem for other gallery owners in Schiedam galleries in Schiedam agree on this”.

Jacques Tange will participate in the MET AMS event in Amsterdam on June 15. He will do ‘live’ paintings during this event. The paintings will then be for sale as NFT (non-fungible token).

Jacques Tange made a statue of Miffy. That statue has been on the Mariaplaats in Utrecht since September 2016. Utrecht will be nine hundred years old in 2022. On the occasion of this anniversary, Ravensburger has made a puzzle. Maarten van Rossem travels with Tange’s Miffy statue on a cargo bike, as can be seen in the puzzle. 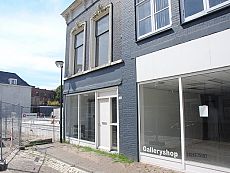