The rector of the University of Antwerp, Herman Van Goethem, already emphasized on International Women’s Day in 2020 how important the cleaning staff is for the university. Now, two years later, the same cleaners are being told that their contracts will be terminated and they will be given new ones that are cheaper for the university, but mean even lower pay and increased workload for them. .

Cleaners are of great importance to a university. This became clear once again during the coronavirus crisis. However, cleaning staff have been complaining about the increased workload for more than a year. On March 8, 2022, from ‘Students in solidarity with the staff’, a platform of various student associations, we carried out an action to denounce the unacceptable treatment of cleaning staff. The campaign was a great success, there was a euphoric atmosphere in the university.

On March 8, 2020, the University of Antwerp released a film in the context of International Women’s Day. The intention is to put the cleaning staff, which is mostly made up of women, in the spotlight. Rector Herman Van Goethem even talks about an honorary doctorate for cleaning staff, because they are essential to the running of the university.

Less than a year later, it is clear that the support the university expressed for the custodial staff in 2020 was only apparent. The UAntwerp cleaners, most of whom are subcontracted by ISS, are told that their contracts will be terminated and they will be given new ones. These new contracts are 18 percent cheaper for the university, but mainly mean cleaners get fewer hours, and thus lower wages and pensions. Furthermore, the auditoriums have not been reduced and the workload has increased enormously. ISS promised last year that the resources would be used to facilitate the work of the cleaners, but not much has been achieved yet.

Cleaning staff have been complaining about increased workload and lower wages for a year, so it has had no effect so far. Inge Bruckenbrug, a cleaning lady at the university, testifies: “We can’t take it anymore, I have to clean three different places at five o’clock. We work hard to make sure every student has a clean classroom.”

With the platform ‘Students in solidarity with staff’ we want to denounce the university’s policy regarding cleaning staff. Last year we started a petition, which has already been signed by more than 3,000 students. Today we stand alongside the cleaners, the unions and the ‘March 8 Committee’ of the University of Antwerp to once again express our dissatisfaction with the way ISS and the university are treating the cleaning staff. 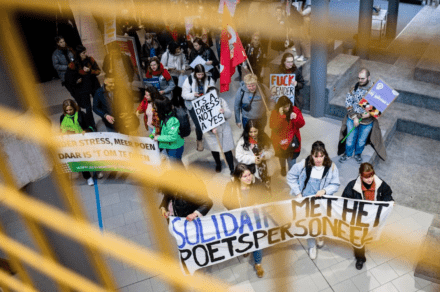 We, together with the unions, had staged a strike picket at the university, music was played, noise was made and speeches were heard. Students helped cleaning staff empty trash cans and feminist slogans were chanted. We will not allow the university to ignore us anymore.

“According to research, essential professions are consistently undervalued,” said Dominique Kiekens of the ‘March 8 Committee’, “These austerity measures mainly affect women, people with a migrant background and people from the lower classes.” Inge Gielis from ACV pointed out the problem of outsourcing: “The companies face each other and the university opts for the cheapest possible contracts. Cleaning staff are victims of that.” Cleaners are just as important to the university as teachers or students. Without them, university life comes to a standstill. It’s time for them to get the respect and prestige they deserve. 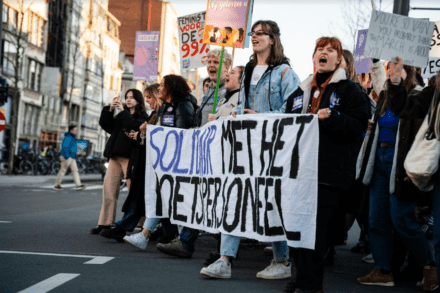 But we don’t just go out for the cleaning staff. In recent months there has been a lot of talk in the media about another consequence of the hierarchical and patriarchal culture in the university: the transgressive behavior of which students and teaching staff have been victims. We also go out for them. There is an urgent need for a clear and independent hotline that victims can turn to. A hotline where the prestige of the university does not take precedence over the help and support necessary for these victims.

After having made ourselves heard on our strike picket, we move full of enthusiasm and noise through the university towards the demonstration organized by ‘Collecti.ef 8 maars’. The demonstration had eight hundred participants. The biggest atmosphere, however, was in the student block, where we hoarsely shouted in the streets of Antwerp with over a hundred students. Because March 8 is more than a day to honor women. It is a day of struggle, a day in which women show the world over and over again how much their work is worth. 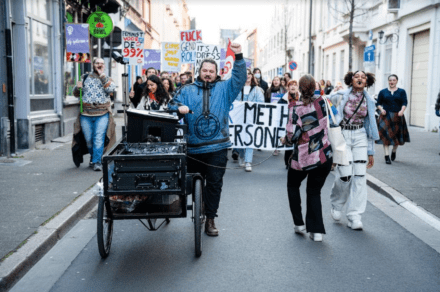 There is still a lot of work to be done, there are many battles to fight. From better contracts for cleaners to more support and follow-up for victims of transgressive behavior. That is why we will not stop fighting after today. With ‘Students in solidarity with the cleaning staff’ and the ‘March 8 Committee’ we will continue to harass the university until they give the cleaning staff the contracts they deserve. For example, on March 21, the International Day Against Racism and Discrimination, we are organizing a movie evening where a documentary about the cleaning staff at the University of Antwerp will be shown. We are planning many more solidarity actions in the coming months. Women will continue to take to the streets for each other until they are finally heard. We are far from done calling.