Never before have so many new people connected to the Internet as in the corona year 2020, at least not since the UN agency ITU started keeping figures on this in 2005. But that does not mean that the digital divide has really closed. It is precisely the most vulnerable people who have to deal with expensive internet connections, lack of devices and cybercrime or repression.

IConnecting everyone on our planet to the internet – that is what the United Nations wants by 2030. But the transformation from an analog to a digital world is moving fast and threatens to leave many people behind. For this reason, in June 2020, the UN launched a plan, the Roadmap for digital cooperation† This should help achieve a more equal and secure digital world.

“We have a collective responsibility to use technologies in ways that maximize benefits and prevent unintended consequences and abuses,” said UN Secretary-General Antonio Guterres at the launch of the Roadmap.

We saw very directly in the last two years what the benefits of these rapid digital evolutions are. The pandemic forced us to go into our room several times, but thanks to numerous digital media and technologies, we stayed connected to each other and the rest of the world. Or at least with a large part of it, because the forced digitization of society also revealed how unequal the digital benefits are distributed.

Working from home was not an obvious option or solution for everyone to a life in lockdown, especially in a cramped apartment with a poor internet connection. Distance learning was not a solution for children who had to share a laptop and a room with their parents, brothers or sisters. Not in Belgium, not in Burundi, not in Brazil, not anywhere else.

Existing inequalities, such as social class, race or gender, are exacerbated by digital inequality. Those who already find themselves in a situation of inequality, in most cases also end up on the wrong side of the digital divide. At the national and global level, where the gap between the more and less developed regions is also growing.

“We can’t close the digital divide if we can’t measure it,” said Doreen Bogdan-Martin of the United Nations International Telecommunication Union (ITU) agency, presenting the new figures in December. That is why the ITU annually keeps figures on the number of Internet users from more than 200 countries.

The number of Internet users has never increased as much as during the corona year 2020. And in 2021, a total of 4.9 of the 7.8 billion people on our planet used the Internet. This also means that 2.9 billion people still do not have access to the Internet.

South Asia has the largest group of Internet users, at the same time at least one billion people in India, Bangladesh and Pakistan are offline.

The largest group of Internet users can be found in South Asia, at the same time at least one billion people live offline in India, Bangladesh and Pakistan. In South Asia and Africa, many people live in rural areas.

This illustrates another important gap: globally, there are twice as many Internet users in urban regions than in rural areas. India, for example, has the second largest number of Internet users after China, accounting for 13 percent of the total number worldwide. At the same time, more than half of the Indian population is still not connected to the Internet.

Furthermore, it is precisely in these rural regions where the digital divide also translates into a gender divide. Where Internet access is more limited, the difference in access between men and women is greater. 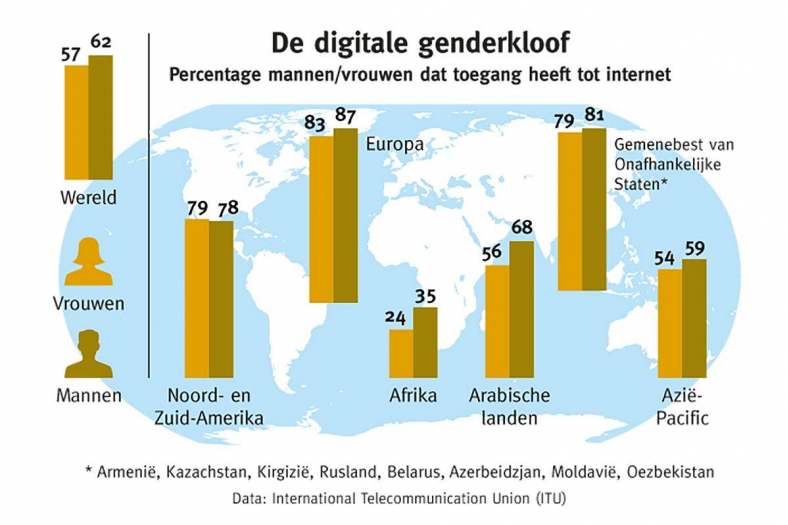 ‘Closing the digital divide means more than just putting everyone online,’ says ITU Director Bogdan-Martin. ‘Digital platforms and services are becoming more sophisticated, and the digital divide is increasingly shaped by how people can meaningfully use their connection to the digital world.’ In other words: how well you can use the Internet when connected.

A zoom call over a cellular network costs $4 in the United States. For the same conversation you pay 14 dollars in Mali or Benin.

And that depends on a lot of additional factors. Do you have your own resources at home, like a laptop or smartphone? What is the speed and quality of your connection? Is it an Internet connection through fiber optic cable or through a mobile network? How expensive is your connection compared to your income? And how well is your digital security and privacy guaranteed? 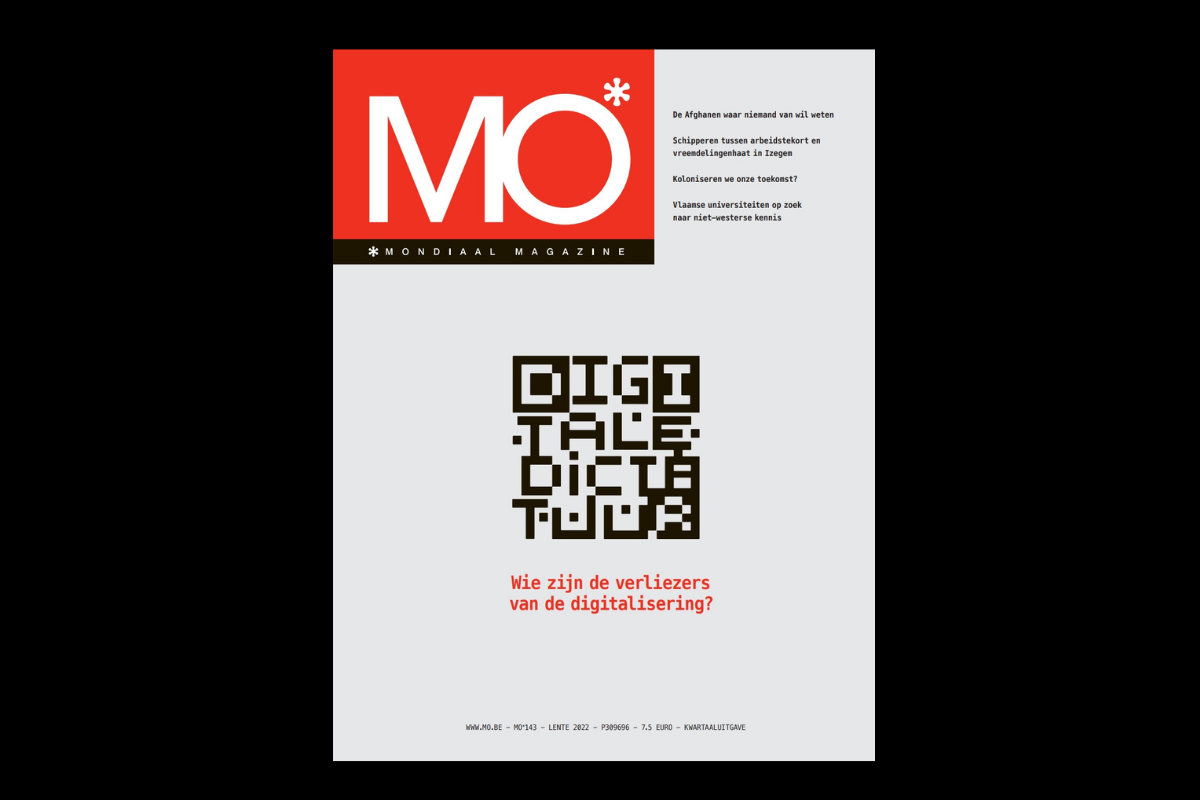 MO*talks: Who are the losers from digitization?

Orion Wilcox, an analyst at the ‘international development company’ DT Global, illustrates that difficulty for the African continent. In a blog post for the company, he maps existing and planned cable connections in Africa. Telecommunications companies, Wilcox argues, are not competing with each other to attract potential Internet users to remote and sparsely populated areas. As a result, connections in sparsely populated areas are more expensive, if installed at all.

The UN wants the average cost of a digital connection worldwide to be no more than 2 percent of monthly gross domestic product (GDP) per capita by 2025. The latter is a factor often used to compare the wealth of different countries. It shows how much market value is produced within a country in a month, divided by the number of registered inhabitants of that country.

Wilcox also calculated the cost of a one-hour Zoom call in various locations around the world, based on the amount of data that call consumes. Through a mobile network it costs 4 dollars in the United States. For the same conversation you pay 14 dollars in Mali or Benin. And that absolute cost is actually even more expensive for a Malawian, because their average income is still much lower.

Bridging the digital divide cannot be left to the market, Wilcox concludes. Dhwani Goel, a digital threat researcher at Crisp, offers a striking example in an essay for MO*: “The biggest market for Facebook is in India, but the company isn’t setting up any data centers.” Geopolitical tensions also pose a challenge to the digital goals of the UN, as the Roadmap for Digital Cooperation clearly emphasizes international cooperation. 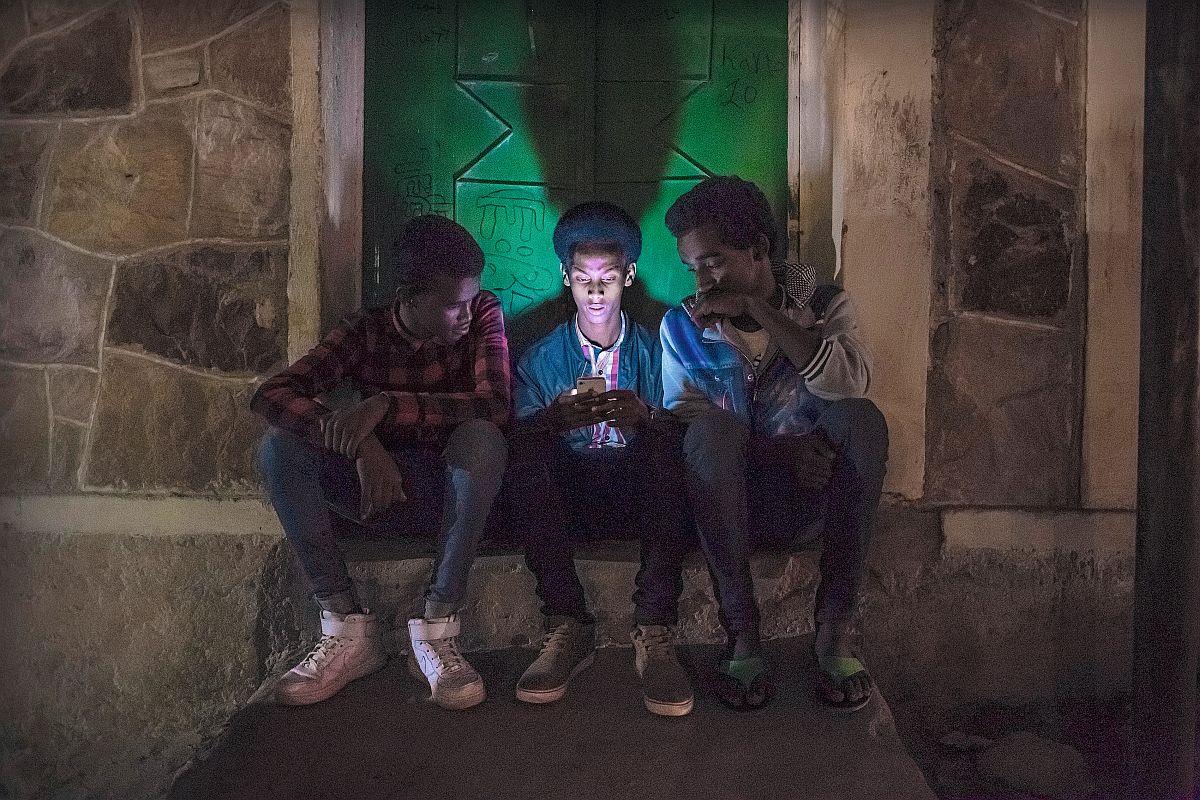 “The biggest role in eliminating digital inequality lies with the US and China,” Cheng Li of the Brookings Institute wrote in a commentary several months ago. in Think China magazine. He refers to figures from the World Economic Forum in Davos in 2019: 90 percent of the global digital market (which includes 70 of the largest digital platforms) is in the hands of one of the two superpowers.

Only 4 percent of the global digital market is in Europe, and just 1 percent in Latin America and Africa combined. In fact, 7 of the biggest digital platforms (Microsoft, Apple, Amazon, Google, Facebook, Tencent and Alibaba) are owned by the US or China.

There is no equality without security

The World Economic Forum publishes a report at the beginning of each year that lists the biggest threats facing the world today. The 2022 report clearly identified digital inequality and cybersecurity as expected challenges in the short and medium term.

Those who have recently had access to the internet are the most vulnerable to cybercrime. Or even for repression.

It identifies digital inequality as a major short-term risk, especially for Latin America and Sub-Saharan Africa. “Governments, companies and individuals will rapidly digitize there, but with limited technical and financial resources to increase cybersecurity,” reads the report, which was drawn up – as usual – by experts from the business and political worlds.

Subscribe to our newsletters and stay informed of global news.

And limited or absent cybersecurity also stands in the way of inclusive digitization, the WEF warns. Those who have recently had access to the internet are the most vulnerable to cybercrime. Or even for repression. Authoritarian states can misuse digital technology to control citizens, repress political opponents, or track activists.

The risk of repression with the use of digital technology is more prevalent in authoritarian states, also writes Steven Feldstein, Democracy, Conflict and Governance researcher at the Carnegie Endowment for International Peace, a private NGO. “But weak or fragile democracies also use digital strategies to oppress people, such as shutting down the internet, misinforming or censoring through social media.”

According to the WEF, the greatest responsibility for a more egalitarian and secure digital world falls on governments. They can and must provide the necessary infrastructure, fight disinformation, legislate against cybercrime, make the population digitally literate and secure the necessary raw materials. But can governments around the world put geopolitical tensions aside for international digital cooperation?

This analysis was written for the spring issue of MO* magazine. For only 32 euros you can hire an annual subscription here! You can also become a proMO* for only 4 euros per month. You will also receive our magazine and thus support our journalistic project. Attention: Knack subscribers automatically receive MO* with their package.