For Marinka Nooteboom, leadership means giving people the space to perform optimally. “Our company used to be organized in a traditional way, like a pyramid. I prefer to turn that around. I believe that if you keep responsibilities as low as possible, people enjoy their work more and their qualities mature more. Today we work with self-managed teams, which is very different from the past. It’s not just me, it’s also the spirit of the times. You can’t run a business alone, you have to gather good people around you to be successful. I can’t weld a trailer, everyone has their own experience and you have to use it.”

Nooteboom describes his leadership style as “determining the big picture and being a facilitator within it.” “Sometimes you have to be unconventional, to consciously make a change, because otherwise everyone will keep doing the same thing over and over again,” she says. “I put a lot of effort into agility in the organization, being able to respond quickly to changes and innovations. Then you also have to create an atmosphere that shows that everyone is doing it together. It is deadly to impose on people how to do something from above. By involving people in decisions, you build support and motivation. Although it shouldn’t be a Polish Earth Day either. It is a defined group that joins the conversation.”

When Nooteboom took over the family business, the people who had been working there for some time took some getting used to. “I think it’s important that we all speak the same language and use the same numbers. More in facts than in the gut. That sometimes looked like Big Brother, wanting to control everything. But a well-developed financial management is an important tool to improve sales, purchases and production. The organization now fully accepts it.”

Looking around, Nooteboom sees more appreciation for diversity in leadership. “And for me it’s not so much about more women, but about a mixture of different characters and points of view that contribute to the success of a company. This is being adopted more and more in organizations. Another trend I see comes from more automation. For example, we have welding robots and laser-controlled cutting machines. As a result, the welder of the past becomes even more of a specialist. That also requires a different way of managing.” 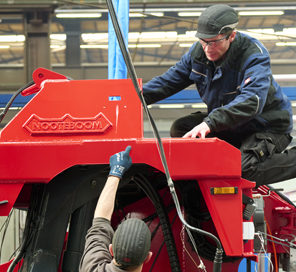 Since his appointment, Nooteboom has invested heavily in the growth and organizational change of the family business. This too was badly needed, he says: “During the financial crisis, Nooteboom lost 60 percent of its turnover and was a losing company. My goal was not to get more sales, but to generate more profitability. We are in a cyclical market, which reacts strongly to less favorable economic times. Therefore, you must organize your company in such a way that it will make a profit even in those less favorable times. That means producing differently, taking a closer look at what orders you do or don’t accept, and organizing the purchase of materials differently. Self-managed teams are also an example of this, so fewer managers are needed.”

Another way to grow was to bet heavily on innovation. “We have launched a number of groundbreaking innovations that have earned us multiple patents and awards. That is why we are known as a pioneering company. In addition, we focus on sustainability, both for the work environment and for the trailers. Because the trailer development process is long, we looked at the innovations that should take place in 3-5 years. Then you talk about new materials, 3D printing, electric propulsion and telematics. We have also invested heavily in innovating the production process, using welding robots and laser cutting machines and, above all, adapting our working method accordingly.”

Proud of the manufacturing industry

Because Nooteboom has a background in financial services, when he took over he was surprised at how beautiful the manufacturing industry really is. “In the past, much of the manufacturing industry in the Netherlands has moved abroad, which we have done ourselves. But for me the challenge is to remain competitive in the Netherlands. It’s hard to get technical staff, so we have to show how good it is to contribute a Dutch product that is traveling all over the world. We should be more proud of that.”