In the framework of International Women’s Day (last March 8), Belgium’s Black History Month organized an event on Black Feminism at the Kaaistudios in Brussels. Writer and activist Philsan Osman (she/her) was one of the speakers during the panel discussion with Henriette Essami, Aida Yancy and Collectif Susu, and moderator Rachael Moore. Malkia Mutiri spoke with Philsan Osman a day after the event about building community and Black History Month in Belgium. This was her conversation.

Philsan Osman (she/her) is from Somalia. She is a writer, activist, and community builder. Philsan studies African languages ​​and cultures at Ghent University and co-wrote the book ‘Who do we want to care for? Ecofeminism as a source of inspiration’, published by EPO. She is also an event and production manager for the Belgian Black History Month Ghent team and an editor and writer for the online feminist magazine Spijker.

This conversation between Philsan Osman and Malkia Mutiri took place on March 9, 2022, one day after the panel on black feminism.

How did you end up involved? When did you decide to use your voice?

philsan osman:: “I think that happened spontaneously and organically. When I started my studies at the University of Ghent, I realized that I had to make my voice heard more and more and that had a kind of snowball effect. It started with a speech here or an invitation there, and from there more and more came my way.

Since I wrote the essay and since the book ‘Who do we want to take care of?’ came out, my focus has shifted to how we should study the intersections, for example, between gender and class. It wasn’t something that happened out of the blue, I just jumped in organically.

How did the book come about and how do you feel now that it is published?

“The part of the book that I wrote was written when I was working on my thesis, so it didn’t feel like I was actually writing a book.

When it came out and I saw it in book form, I couldn’t believe it (laughter† I got confused because I had my own name and my own face (there is a picture of me on the back cover of the book).

I couldn’t believe these were my own words. I kept thinking “Are they written in a real book? Are they being sold? It was a very strange feeling. I think only now, almost 6 months later, do I feel a kind of connection and recognize what I wrote, how I wrote it and when I wrote it.

It was a very interesting period. I don’t think that neither I nor any of the other authors of the book (Dirk Holemans and Marie-Monique Franssen) really understood what was going to happen when we wrote it, because I think we had a little book in mind that was meant for the ‘Ecopolis’ event. (Ecopolis is an annual event with debates, conferences and workshops for all those who are committed to a sustainable future on our planet).

We didn’t think it would continue to be sold and translated into French and English.”

You were at the panel on Black Feminism in Belgium on March 8, organized by Belgian Black History Month. How do you feel after the panel discussion and how did the audience feel?

“When they asked me to join the panel, I was actually very honored. I didn’t know in advance how it would turn out, but afterwards I can say with certainty that how everything went during yesterday’s event feels great. I was especially happy that we were able to give black women and queer people the space to come together and share experiences, but also to just ‘be’.

That’s something that struck me that night, a lot of people who were just there, just being there and enjoying the conversation. That was really nice to see. I’ve been on panels several times, to talk about the weather, for example, and the audience is always predominantly white.

The last two BHM Belgium events I attended in Brussels, the one where I discussed the book with Malcom Ferdinand and the one on March 8, felt very safe. Never before have I felt so safe in a room to talk about my work. Every time I look back, it gives me energy.

Philsan Osman at the panel ‘Black feminism in Belgium: a look at the past, present and future’ on the International Day of Struggle for Women’s Rights. Photo: Malkia Mutiric

“To be a good writer, it’s important to be part of my community. I want to understand where things are going well and where they are going wrong or wrong.

When things are not going well, I want to be able to think and commit to finding ways that we can collectively come together and collectively serve one another. I believe that these different ‘roles’ or areas feed off each other. If I had to give something up, I would always choose to be useful to my community.

So if I had to make a decision, I would always remain committed to sharing my privileges and putting them to work for the people who matter most to me.” 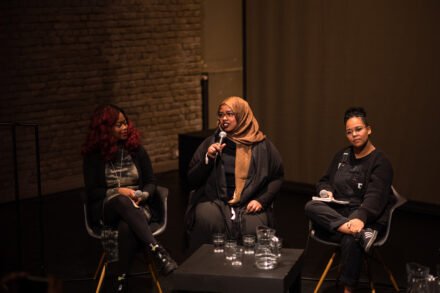 Philsan Osman at the panel ‘Black feminism in Belgium: a look at the past, present and future’ on the International Day of Struggle for Women’s Rights. Photo: Malkia Mutiric

What events do you personally hope to attend during Belgium’s Black History Month?

“I think if you are black and queer, the Black Queer Fest in Antwerp (which will take place on March 19 in Arenberg) is something you should attend. Also Chop Life… That’s something a lot of people will enjoy.

For me personally, the book fair is the most interesting because it will be very nice to see all those authors and books in one place. It is also one of the events that the members of BHM Belgium have worked very hard on.

And finally our exhibition here in Ghent. We have collected photos that we were allowed to use from people in our community. We had no curator, so we compiled a collection of photos reflecting our time since get together to portray.

Once all that material is put together, I think it will be a good show. Not only come and see the photos, but also be in the space, be in the space to come together.

However, I will not be able to attend all of them, unfortunately I cannot be in more than one place at a time (laughs†

This interview, which originally appeared in English, was translated by Evi Van Thienen.